WordCamp & BarCamp 2012, three days of learning and meeting people with your same interests is the best way to spend a weekend in Miami. OK, at least in the geek world it is!

This years, WordCamp had an all day beginner’s session on Friday with tracks that included the very basics of getting started such as: how to pick a domain name for you site, where to host, how to blog, and more. For me, the top 3 presentations on Friday were Denise Jacob‘s The Art of Disciplined Creativity; Aubrey Sears‘ Creating Effective Proposals , and Blanca Stella Mejia’s Weaving Your Way Around Widgets & Plugins.

The Saturday sessions were divided in three tracks, beginners, intermediate/advance or power users, and developers. Fortunately, there were four of us attending this year and we were able to divide and conquer! The theme I “heard” from many presenters is: BACKUP! Yes, backup your wordpress site. There are many plugins available that will do the job and we will post the most recommended ones in this blog later this week.

The topics on Saturday were all very interesting and even though I consider myself a wordpress advance/power user, I always learn something new at WordCamp. This year, the presenters that I enjoyed the most on the second day included Andrea Graham on “How to Release your Site to the Wild”, John Sexton on “Responsive Web Design”, and Syed Balkhi on “How to Do Lead Generation on WordPress.”

All of the slides/presentations from the speakers are available at the WordCamp Miami’s Schedule page. 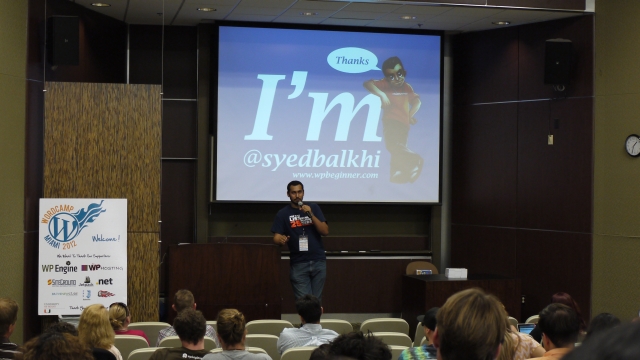 After two full days at WordCamp, I so didn’t want to wake up yet again early on a Sunday morning. But BarCamp is the un-conference of conferences.Â  My brain was almost to full capacity at that point. But we made it, at least Denis and I did! Got to meet great people and learned a lot.

I strongly recommend attending both conferences at your local city if you have a chance. It’s a great way to meet people with your same curiosities, connect with other developers and start-up entrepreneurs, and share knowledge with other conscious businesses.